Released in Konkani as ‘Tishttavni’ in 2020, it has been quite the wait to be able read Damodar Mauzo’s latest collection of short stories. Translated by Xavier Cota, the book was recently published by @penguinindia for Mauzo’s English readers.
Bitter, honest, incisive, Bhuwaneshwar’s stories forces you to be truthful to yourselves for that one second when you are reading through his stories. Short and brutal, his rage is felt in the choice of words and the emotions at play. The anger that you feel on someone else’s actions, the loathing that you feel within you, all comes pouring out in the few sentences that he crafts his stories on. It’s like he’s in the room, narrating them to you with equal emotion as he feels them. Whether memory has calmed the storm or whether it’s torn open old wounds, the hypocrisy in the way we behave is slowly skinned away in each of his stories.
Here's a non-bookish post that the content planner in me was urging to put out for all designers and content creators. I hope this helps in leaving social media managers less frustrated at the end of the day and the designers happier with their output and by chance you are the same people, you know this already, so please ignore.
Around this time last year, there was a frenzied excitement. I was accepted to the Seagull School of Publishing and was too busy completing work and packing to even realise it was nearing midnight. I had a flight to catch the next afternoon and I wanted to be super fresh. I was starting school! I was going back home for three months!! So many firsts since I got married...and then the lockdown happened. A virus decided to invade all our lives and the definition of normal was questioned. It still is, isn’t it? The first few months went in trying to make everyone else feel ok at the cost of my own sanity. I was delirious, I was crying and nothing felt okay. While people read copious amounts I felt it was a daunting task to go through a single page as work and home life blurred further and late nights meant odd calls and crisis management and weekends? Were there any which were off?
Looking at this unknown man, the elderly lady said, ‘Lord Bishwanath, please do not make me a widow in my next life.’
This day marks the 19th anniversary of the Twin Tower tragedy. However, what followed was a sheer abuse of power. In January 2002, the U.S. government began the transfer of suspected terrorists to a naval base in #GuantanamoBay, Cuba. As of January 2019, 40 prisoners remain in Guantanamo. They haven’t been charged yet. 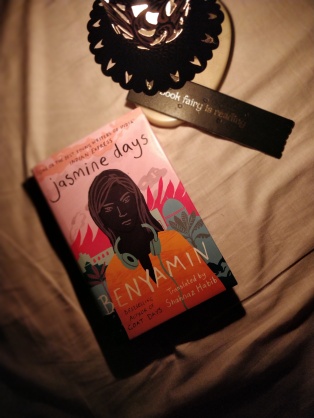 Jasmine Days by Benyamin
My rating: 5 of 5 stars

So I just finished reading ‘Jasmine Days’ by Benyamin and was surprised to see that last year’s JCB Prize Winner was actually a translation of an Arabic novel by Sameera Parvin originally titled ‘A Spring without Fragrance’. I know people who have read the book would know this but those of you like me would be taken aback at the power of a good story. For this one moment, I actually took a step back and wanted to thank God for creating such deft translators. And then my surprise was corrected by this article where Benyamin clarifies that the ‘Arabic translation’ was a literary device he used where the reader entered his fictional world right from the cover page and remained enthralled till the translator’s note.

Coming back to the novel, having read Cairo by Ahdaf Soueif, I sort of felt I had a hang of where this was going but I was so, so wrong. Despite all that was televised and all that you heard and read about the role of social media, there are certain images and phrases about the book that you can’t take out. Who is the oppressor, who are oppressed? Who is right, who is wrong? An entire generation is silenced and yet another grows older with anger. When will there be peace and tolerance or forbearance and forgiveness? There are so many questions that plague your mind as you go through Sameera’s journey. All she wanted to be was a radio jockey in a foreign country her father adopted to ensure they lived a better life in Faisalabad. All she ever wanted to be was honest, and the saddest part is that her honesty is not expressed to the people who matter most. She was quelled before she could raise her voice.

I’m eagerly waiting for the translation of his latest novel – Al-Arabian Novel Factory – which is a twin novel or we can say a continuation of where Jasmine Days ended. An excerpt is available in the hardcover copy and online and it’s almost torturous; the wait!

View all my reviews